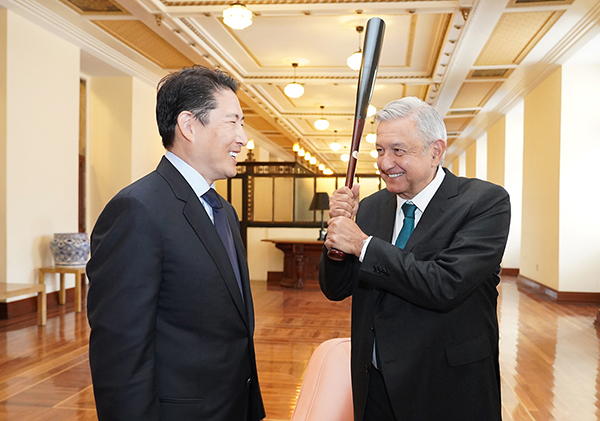 This meeting was arranged after Hyosung TNS, Hyosung’s IT affiliate, recently received the order of all 8,000 ATMs (worth KRW 203 billion) needed for the large-scale welfare policy “Rural ATM project,” under the direct leadership of Chairman Hyun-Joon Cho.

□ Chairman Hyun-Joon Cho says, “We will contribute to improving the welfare and the quality of life in Mexico.”

During this meeting, Chairman Hyun-Joon Cho thanked President Obrador for giving Hyosung the opportunity to participate in the massive project and expressed his hope to contribute to improving the quality of Mexican people’s lives as well as to developing its economy by actively participating in power infrastructure projects and renewable energy projects such as photovoltaic power.

Especially, Chairman Cho noted that “I was deeply impressed by the Obrador administration’s policy and philosophy that prioritizes people’s livelihoods.” “This Rural ATM project will become a crucial opportunity for Hyosung to fulfill its corporate social responsibility beyond the level of business seeking profits,” emphasized the chairman. In addition, Chairman Cho vowed, “We will do our best to improve the quality of life of the people and strengthen the welfare delivery system of Mexico by completing the project seamlessly so that Mexican people can use ATMs without any inconvenience.”

In response, President Obrador stressed the importance of the Rural ATM project and said, “Since Hyosung has world-class ATM technology, which is the core of this project; let's work closely together for the success of the project.” “I look forward to seeing you again after the project is successfully completed,” added the president.

In Mexico, the world’s 15th largest economy by GDP, 20 million people or 17% of the total population of 120 million are receiving welfare subsidies but 75% of the country’s land is in the blind spot of financial services.

As a result, the government’s welfare subsidies have not been properly delivered to vulnerable groups in many cases, so the Mexican government has been pushing for the “Rural ATM project,” through which beneficiaries can withdraw cash directly from ATMs using a welfare card.

The successful order for this project was possible by bolstering the sales network with the Mexican government under the command of Chairman Cho from the beginning stages in early 2018. Hyosung TNS will solidify its status in the market by delivering 8,000 ATMs by the end of 2020, expanding its ATM market share from the current 2% to 15%. Hyosung TNS ranks first in the US ATM market with 46% market share (based on 2019 annual sales).

After the meeting, Chairman Cho visited a welfare center in Mexico City, a trial operation site of the project, where he checked Hyosung TNS’ ATMs and talked with users of welfare centers to listen to feedback about the service.

Chairman Cho also met with key officials of the Obrador government and asked for an opportunity to participate in Mexico’s power infrastructure projects based on Hyosung’s power and renewable energy technologies and know-how in the Mexican market, where the company is strengthening investments in the oil and gas industry and combined cycle power generation.

In addition, Hyosung introduced two airbag manufacturing subsidiaries (fabric production and sewing) in Mexico and expressed their ambition to grow their businesses through continuous quality improvement.

□ Continue to discuss business cooperation with top global leaders of countries such as India, Vietnam and China

Also, Chairman Cho has not missed out on various global exhibitions in an effort to check trends in the textile industry. Chairman Cho has listened to the voices of global customers at events such as Interfiliere Paris 2019, the world’s largest lingerie and swimsuit exhibition held in Paris, France as well as Intertextile Shanghai, China, which is the largest textile market in the world.


*About Hyosung : Hyosung Corporation is a South Korean industrial conglomerate, founded in 1966. It operates in various fields including heavy Industrial machinery, advanced materials, chemical industry, and textiles. Its CEO is Hyun-Joon Cho and the headquarter is in Mapo-gu, Seoul. Hyosung has a global network of about 90 sites in the U.S., China, Europe and other parts of the world, with about 30,000 employees. Tire reinforcements, spandex, and seatbelt yarns are No.1 in global market share.