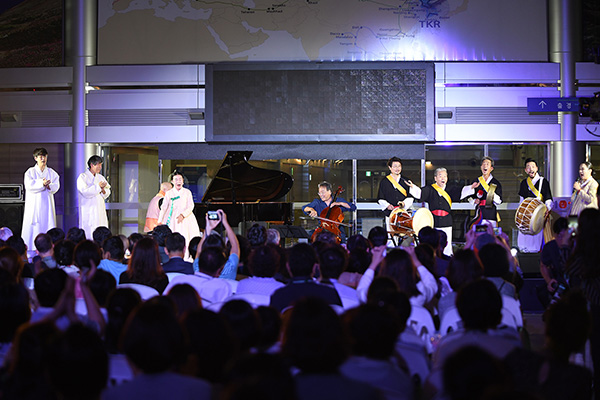 Co-organized by Hyosung and the Ministry of Culture, Sports and Tourism, the “Culture Connects: DMZ Peace Concert” was held at Dorasan Station inside the demilitarized zone (DMZ) in Paju on the afternoon of September 9.

The DMZ Peace Concert was held as part of Hyosung's mecenat activity called “Yo-Yo Ma Bach Project.” The Bach Project consists of the “Park Concert” held on the 8th and the DMZ Peace Concert (9th) held as a “Day of Action.” Yo-Yo Ma has previously addressed immigration policy, local community culture, and homeless issues through Day of Action events in Mexico, the United States, and Greece.

At the DMZ Peace Concert, Yo-Yo Ma delivered the message of peace on the Korean Peninsula by playing with Okdal, Korean traditional musicians Kim Deok-soo and Ahn Suk-seon, and North Korean pianist Kim Cheol-woong. Yo-Yo Ma prayed for peace on the Korean Peninsula by performing with two young North Korean musicians as well as playing “Bach’s unaccompanied cello suites,” which were presented at the Park Concert. The event was also attended by diplomats such as Park Yang-woo, Minister of Culture, Sports and Tourism, Foreign Minister Kang Kyung-hwa, Vice Minister of Unification Seo Ho, Paju Mayor Choi Jong-hwan, and British Ambassador to South Korea Simon Smith. Attendees and citizens alike wished to heal the broken wounds of the two Koreas through a ribbon-tying ceremony.

In his opening speech, Yo-Yo Ma introduced the Bach Project, through which he has played Bach’s unaccompanied cello suites in 36 cities on six continents since August last year, and explained the purpose of this visit, “I wanted to play like the same moon that families in the South and the North look at, and my old friend Cho Hyun-sang, Hyosung’s president, gladly responded to my desire to play Bach at the border between the two Koreas. I would like to express my sincere gratitude to the Ministry of Culture, Sports and Tourism and Hyosung for jointly organizing and sponsoring the Bach Project successfully.”

The Bach Project and the DMZ Concert were held as the Ministry of Culture, Sports and Tourism and Hyosung sympathized with Yo-Yo Ma’s commitment to peace and played an active role in making them happen. A Hyosung official said, “I am pleased to sponsor these meaningful events. I believe that the DMZ concert held as a Day of Action will contribute to the peace, harmony, and coexistence of mankind. I pray that the warmth of peace will also widely spread on the Korean Peninsula.”

Meanwhile, Hyosung has performed various activities in the fields of culture, arts, and sports, including the “Hyosung Culture Series,” which has supported the socially marginalized since 2010, with the proposal by President Cho, who has actively engaged in many activities for the socially underprivileged. In particular, some of the members of the “Onnuri Love Chamber,” a disabled children’s orchestra who were taught at the “Yo-Yo Ma Teaching Class,” entering a musical university made headlines. In addition, Hyosung is carrying out various cultural and art social contribution activities such as supporting artists with disabilities, palace restoration projects, sponsoring theater troupes at Daehangno, Changdeokgung Palace clean-up activities, and supporting barrier-free film production.