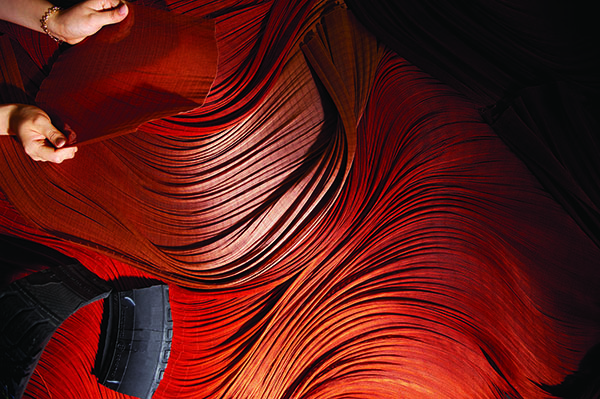 Hyosung Advanced Materials has succeeded in the development of ultra-high-tensile carbon fiber, taking one step closer to standing completely on its own in the production of aeronautic materials.

Hyosung Advanced Materials announced on October 12 that it succeeded in the development of ultra-high-tensile carbon fiber H3065 (T-1000 class) whose tensile strength and elasticity are at least 6.4㎬ and 295㎬, respectively. The remarkable achievement is the result of an inter-ministry technological development program started in August 2017 and participated in by the Agency for Defense Development (ADD) and the Institute of Civil-Military Technology Cooperation (ICMTC) with investment from the Ministry of Trade, Industry, and Energy (MOTIE).

Hyosung Advanced Materials has produced carbon fiber H2550 (tensile strength: 5.5㎬ / elasticity: 250㎬, T-700 class), which is chiefly used in △ hydrogen fuel tanks, △ electric cable core, △ PV thermal insulation, △ sports, etc., as its tensile strength is ten times that of steel. In contrast, the newly developed one boasts of tensile strength that is 14 times that of steel, and it is used in a variety of sectors such as aeronautics and defense to make airplane fuselage/parts and projectiles like satellites.

Especially, ultra-high-tensile carbon fiber is an indispensable material for the development of projectiles and satellites. Compared to materials like aluminum used to make projectiles, it is much lighter with excellent elasticity and tensile strength. Thus, it makes the weight of projectiles lower and enables them to withstand the high load weight and exert high propulsion. A projectile made of it uses less fuel, which means that it is possible to raise the weight of payload. Such material was used in the payload pairing protecting the body of the recently launched satellite Nuri.

According to an informed source in defense, the use of such carbon fiber in a projectile brings about maximization of light weight, which means an improvement in speed and maximum range.

□ Hyosung Chairman Cho Hyun-joon: “The feat has made Korea the third country to develop ultra-high-tensile carbon fiber after the United States and Japan, and it will contribute greatly to the development of the country’s carbon fiber industry.”

T-1000 class carbon fiber has been made only by the United States and Japan as it requires highly sophisticated technology concerning △ raw material polymerization, △ radiation, △ elasticity, etc.

“The great achievement has put the country right next to the United States and Japan in the production of ultra-high tensile carbon fiber. We’ll continue to develop more sophisticated carbon fiber materials and do what we can to contribute to the country’s development of carbon fiber industry,” Hyosung Chairman Cho Hyun-joon said, commenting on the matter.

For his part, Director Bang Yoon-hyuk of the Korea Carbon Industry Promotion Agency noted that the country has relied on imported materials for carbon fiber used in aeronautics, defense, future mobility, etc. “The development of the highly sophisticated material by Hyosung makes us expect a great turnaround in the overall situation. It means that those in the country have secured a stable supply network of materials that will serve as the basis for the growth of the country’s aeronautic and for joining the ranks of topnotch countries in the core technology of sophisticated carbon fiber,” he added.

According to business observers, the feat means that Hyosung Advanced Materials has taken one step closer to its objective of ranking among the Global Top 3 in the carbon fiber sector and secured solid competitiveness in said sector, which it regards as a new sector that will provide continued growth and jobs.

Hyosung Advanced Materials plans to wind up its follow-up research for application within the shortest period of time through cooperation with the relevant institutions.

In 2011, Hyosung Advanced Materials developed on its own TANSOME®, a high-performance carbon fiber, for the first time ever in the country. The Company has produced it in its factory in Jeonju, Korea since 2013. Hyosung Advanced Materials plans to invest one trillion won to increase the production capacity of said factory to 24,000 tons a year by 2028. At present, it is carrying out phase 3 of said expansion (from 6,500 tons to 9,000 tons a year).