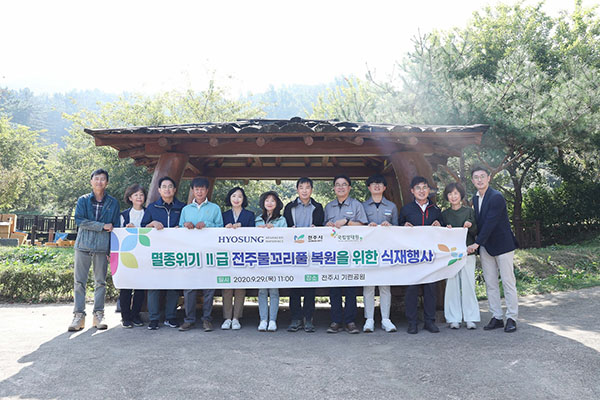 Hyosung Advanced Materials, together with the Jeonju-si and National Institute of Ecology (NIE), held on September 29 an event of planting Jeonju Mulggoripul (Speedwell), which is endangered species Gr-2, in Jeonju Giraffe Park.

Said event was part of the activities included in the MOU for the Preservation of Biodiversity and Dissemination of Ecological Culture signed by Hyosung and NIE last May. Hyosung Advanced Materials came to take part in the project for restoration of said plant as a business running a carbon fiber factory in Jeonju. As its first step taken under said MOU, Hyosung paid the expense for the formation of the ground for growing said plants and donated 2,000 of them. The two will work together to increase the number of plants planted each year and expand the ground for growing them in cooperation with the Jeonju-si.

Said plant was named after Jeonju where it was first discovered in 1912. As plant’s its habitat is disappearing due to environmental destruction, it has been designated as endangered species Gr-2 for protection. The light red flowers are expected to come out by October in the newly formed ground for restoration in said park. By then, the place will be the favorite destination among the locals.

“We are very happy to do something, albeit small, for the restoration of the endangered plant. We’ll continue to lead others in the effort for the preservation and promotion of biodiversity,” Mr. Lee Kun-jong said, commenting on the matter.

The Company has engaged in activities for the preservation of biodiversity including plogging (jogging while picking up litter) at Hangang River, cleaning beaches, protection of endangered species, and removal of ecosystem-disturbing species while awakening employees to the need for such, seeing the heightening of the crisis on biodiversity amid climate change.