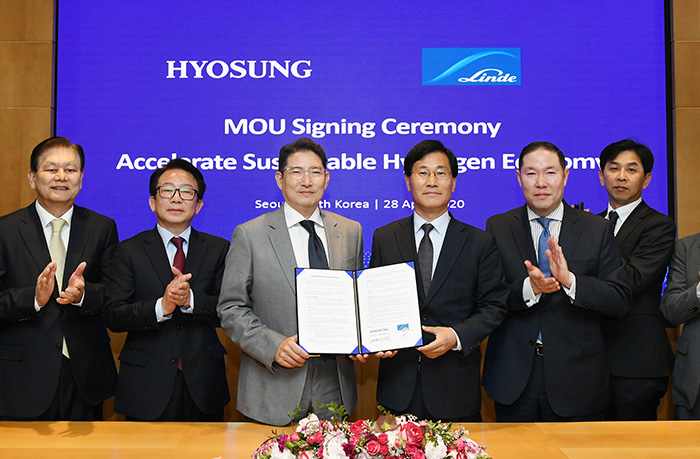 Hyosung Chairman Hyun-Joon Cho has begun to activate the hydrogen economy by preparing to construct the world’s largest liquid hydrogen factory following a large-scale investment in carbon fiber last year.
Hyosung joined hands with the Linde Group, a global chemical company specializing in industrial gas, to establish a value chain encompassing the production and transportation of liquid hydrogen and installation and operation of charging stations by investing KRW 300 billion in all by 2022. For this purpose, an MOU was signed by Hyosung Chairman Hyun-Joon Cho and Linde Korea Chairman Baek-Seok Seong on April 28 at the head office of Hyosung in Mapo, Seoul.

□ To expand charging infrastructure by constructing a liquid hydrogen factory with annual production capacity of 13,000 tons in Yongyeon by 2022
As a start, the two companies will build a liquid hydrogen factory on a 30,000㎡ (about 10,000 pyeong)-plus site in the premises of the Ulsan Yongyeon factory of the Hyosung Group by investing KRW 150 billion. The factory will be the largest in the world as a single plant with annual production capacity of 13,000 tons (enough to fuel 100,000 passenger cars). A joint venture will be established by the end of this year to begin construction of the factory during the first quarter of the following year and complete the factory in 2022.

The new factory will produce liquid hydrogen by applying the hydrogen liquefaction technology and equipment of the Linde Group to the byproduct hydrogen produced in the Yongyeon factory of Hyosung Chemical. The Linde Group has the best production technology in liquefying high-pressure hydrogen gas.
The produced liquid hydrogen can be used not only for cars but also in various mobility areas including drone, vessel, and forklift. As such, it can contribute to the development of related industries.
Once the factory is completed, the two companies will invest an additional KRW 150 billion to establish liquid hydrogen charging infrastructure. For the supply of liquid hydrogen, the two companies agreed to develop a cooperative partnership by expanding hydrogen stations to more than 120 (50 new stations, increasing the charging capacity of 70 stations) in major bases in the nation.
Hyosung Heavy Industries advanced into the CNG charging system business in 2000, expanding hydrogen charging stations since 2008. Currently, the company has built 15 hydrogen stations nationwide, accounting for 40% of the market share as the No. 1 in the nation.
According to Chairman Baek-Seok Seong of Linde Korea, the Linde Group has produced liquid hydrogen in the US and Europe for 30 years and developed various applications including liquid hydrogen station in the mobility area. “We look forward to a significant synergy effect by combining the advanced technology of Linde with Hyosung’s experience accumulated for a long time in Korea,” he said.